JPE’s Gambit and the Bangsamoro

Among the many expressions of support to the Framework Agreement on the Bangsamoro (FAB), the one given by Senate President Juan Ponce Enrile (JPE) stood out from the rest. 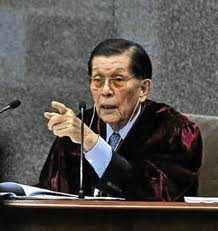 No one may fully fathom the welcome change in JPE’s stance towards the Bangsamoro. Perhaps, JPE saw in the FAB the chance for his own “redemption” in Moro history or he had a real change of heart at the twilight years of his long and colorful political life or he was driven by sheer pragmatism in his support of the FAB.

JPE ‘s support is crucial not only because he is President of the Senate that will approve or reject the Basic Law for the Bangsamoro but more importantly, he offered a fresh “framing” of the FAB which could potentially unlock the key to a workable formula for peace in southern Philippines.

The Bangsamoro as an experiment for the entire country is a new frame.

It departs from the conventional approaches to the Moro question of co-opting Moro leaders to concessions given in peace negotiations that did not work but only perpetuated the patron-client relations between Manila and the Moro region.

This “one-way street” approach in resolving the Moro rebellion posited that to the extent the Moro region morphs into the image and likeness of the national capital region, the more peaceful and prosperous the region will be. The political and economic windfall that awaited those willing to go this route with the central government was irresistible that Manila’s grip of the autonomous region has always been almost absolute. Even reforms in the governance of the region were engineered by Manila.

The autonomous region reflects the very things that ail the country’s political system—feudal, inefficient and corrupt. These are practiced crudely and brazenly because of the prevailing culture of violence and impunity. It doesn’t help that the national bias against the Moro people is further fuelled by the media and opinion makers that highlight the “sins” of the ARMM as if they are “original sins” of the Moros.

The Framework Agreement on the Bangsamoro provides an opening to evolve a regional government that is unique and more attuned to the region’s socio-economic and political milieu. The ministerial-parliamentary regional political system could prove to be responsive to the region’s political landscape divided along ethic and clan lines. This form of regional government holds promise towards democratic and participatory governance with lean yet effective bureaucracy.

Why not a ministerial-parliamentary government for the whole country when the entire country is divided along ethnic lines and we seek to democratize our political system dominated by family dynasties? Why not a federal system of government which is a logical set-up for an archipelagic country like the Philippines?

JPE’s openness to experiment a new governance structure for the Bangsamoro in the context of the nation’s own search for the best political system, frames the FAB as an instrument that will not dismember the country but one that acknowledges the unique contribution of the Bangsamoro in the building of a Filipino nation respectful of the diversities of its people. He may not be conscious about it but JPE opened a new discourse that locates the FAB along the struggle of LGUs and administrative regions for more autonomy and freedom from the shackles of the unitary system that is unresponsive and inefficient to address the concerns of communities.

This framing makes the Bangsamoro a “national project” where every political and administrative region in the country whether Moro or Ilocano, Cebuano or Tagalog identifies with the Moro struggle in their own fight for meaningful autonomy. This makes everyone a stakeholder in the success and failure of the Bangsamoro.