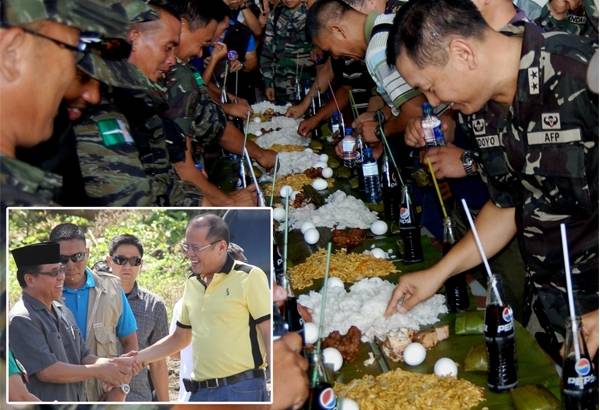 COTABATO CITY, Philippines - Monday’s visit of President Benigno Aquino III at the Moro Islamic Liberation Front’s bastion in northeastern Maguindanao helped start the healing of “old wounds” between government and rebel forces that both bled and suffered from conflicts in decades past.

The president, in a speech, explained that the Sajahatra program is a convergence of education, health, social welfare and other interventions meant to address poverty and underdevelopment in Moro-dominated areas.

Col. Manolito Orense, commander of the Army’s 603rd Brigade, said he never thought the joint security effort for the presidential visit, meant to ward off saboteurs, will have deep, lasting impact on the battle-hardened combatants from both sides that saw each other only in combat situations during the past “hostile years” in Maguindanao.

The boodle fight, led by Orense and the commander of the Army’s 6th Infantry Division, Major Gen. Caesar Ronnie Ordoyo, was part of the activities during the tactical briefing, a day earlier, for the guerillas and soldiers that were to secure the nearby surroundings of the site of Monday’s presidential speaking engagement.

“Whenever we see each other before, we shoot each other and try to overcome one another with heavy firepower. Now we are cooperating with each other establish lasting peace in Mindanao,” Zaipullah said.

Estrada’s military adventurism led to the fall of the MILF’s former bastion, Camp Abubakar Assidik, in the tri-boundaries of Maguindanao’s Buldon, Barira and Matanog towns, and the hoisting of the Philippine flag in most of the guerilla enclaves soldiers overran following heavy offensives that exacted heavy casualties on both sides.

Roa and his subordinates in the government’s ceasefire committee all participated in the boodle fight, held at the old Maguindanao provincial capitol compound, only about 500 meters from the venue of Sajahatra’s ceremonial launching.

“This will mean stronger, more comprehensive cooperation in addressing peace and security issues in areas covered by the ceasefire agreement and `zero hostilities’ which is essential in the restoration of normalcy, massive implementation of health, social welfare and other development initiatives in far-flung areas,” said Roa, himself a soldier who saw action in many hostile areas in the south while a junior officer.

“True and noble warriors are always ready to bury their hatchets and reconcile and come to terms beneficial to all. It’s heart rending to see this happening among combatants on the ground. There is tranquil space now, where they can talk to each other and share their visions of peace and development,” Roa said.

Pocket hostilities that rocked the areas covered by the government-MILF ceasefire pact during the periods only involved feuding rebel groups whose misunderstandings are now being resolved peacefully by the joint ceasefire committee, the local government units, and traditional Moro leaders and clerics wielding influence over the protagonists.