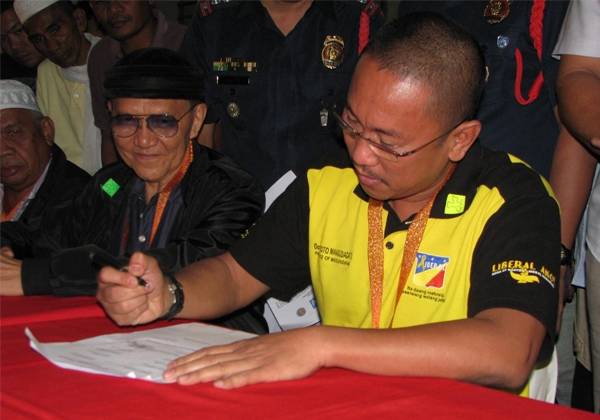 The signing of the election pacts, organized by the Commission on Elections, the Armed Forces, the Philippine National Police, the Consortium on Electoral Reforms (CER), and local election watch groups, was witnessed by religious and traditional leaders, and representatives of various peace advocacy outfits.

Lawyer Rey Sumalipao, director for ARMM of the Commission on Elections, said he was elated with the cooperation of various political camps in the forging of the election covenants.

Sumalipao said the covenants, one for candidates for regional elective posts, and another for aspirants for local and congressional posts in Maguindanao, will help ensure safe and clean elections in the ARMM.

The ceremonial crafting of the covenants was done in the presence of Ramon Casiple of CER and Oblate missionary Eliseo Mercado, Jr. of the Institute for Autonomy and Governance, whose peace-building projects are being assisted by the Konrad Adenauer Stiftung of Germany, the police director of ARMM, Chief Supt. Noel Delos Reyes, and the AFP's Provost Marshal, Gen. Herbert Yambing.

“We ought to thank the candidates for readily agreeing to this forging of election covenants. This is a sign of maturity of politicians in the ARMM,” Sumalipao said.

Maguindanao Gov. Esmael Mangudadatu, who is seeking re-election as official candidate of the Liberal Party, and his lone rival, Sultan Kudarat Mayor Hadji Tucao Mastura, sat beside each other as they signed the covenant and shook hands before hundreds of witnesses and reporters covering the event, held at a local venue.

Most of the mayors in Maguindanao belong to the Liberal Party, whose provincial chairman is Mangudadatu.

“I can assure Maguindanao’s voting population that all members of the Liberal Party in the province will adhere to the provisions of this election covenant,” Mangudadatu said, referring to the agreement he and Mastura signed.

Mangudadatu asked media outfits in Central Mindanao to help him monitor the compliance with the election peace pacts of all candidates vying for local positions in the province.

Mangudadatu even led an Islamic prayer for peace and unity before signing the huge tarpaulin copy of the peace covenant he and Mastura also signed separately, after affixing their signatures to its printed paper version.

The acting governor of ARMM, Mujiv Hataman, who is aspiring for the same post in the May regional elections, was represented in the event by his cabinet secretary, Norkhalila Mae Mambuay-Campong and his running mate, regional vice-gubernatorial candidate Haroun Al-Rashid Lucman.

Sources from the Office of the Regional Governor said Hataman, who launched important, costly projects in the ARMM's island provinces on Monday, failed to arrive and participate in the event due to bad weather.

Lucman, an ethnic Maranaw from Lanao del Sur, said since he is not a “moneyed candidate,” he has no capability to mobilize private armed groups to intimidate voters, or cheat during the elections.