Efforts to improve education in Mindanao gets $85-M boost 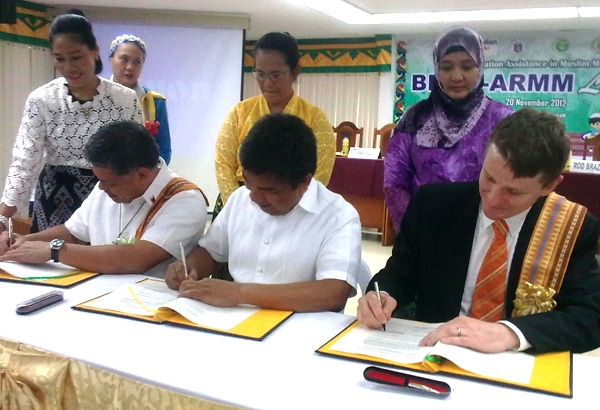 COTABATO CITY, Philippines - Efforts to improve the quality of education in Moro communities in Mindanao got a boost Tuesday with the formal crafting of an $85 million package dubbed Basic Education Assistance to Mindanao (BEAM) from the Australian Agency of International Development (AusAID).

The AusAID has been helping in the ARMM’s education thrusts in impoverished Muslim communities for several years now. The tie-up package will last for 72 months, according to the agreement.

AusAID has earmarked 85 million (in Australian currency), or roughly more than P3 billion, for the education assistance, while the national government is to raise P363 million as counterpart funding.

The project aims to put up new school buildings, libraries and training centers for public school teachers in the autonomous region, which covers Maguindanao and Lanao del Sur, which are both in Central Mindanao, the cities of Lamitan and Marawi, and the island provinces of Basilan, Sulu and Tawi-Tawi.

Hataman, who was appointed caretaker of the ARMM by President Benigno Aquino III in December 2011, said he would see to it that the funds intended for BEAM are spent religiously and in the most transparent manner.

“We are calling on the media community in the autonomous region, the Moro and non-Moro sectors, the civil society organizations, and the rank and file of the regional education department, to help monitor the implementation of projects under BEAM-ARMM,” he said.

In a message to ARMM officials after the signing of the agreement, Luistro said President Aquino wants the BEAM implemented successfully to improve the quality of education in the autonomous region.

The region has serious illiteracy problems. Poor education is also blamed for much of the security woes besetting the area and the grinding poverty stunting the socio-economic growth of the local communities.

Their “education experience” in Australia, according to Brazier, is enough proof on how peace, economic growth and political stability can easily be achieved when people have access to quality education.

Peace advocacy organizations in Central Mindanao were quick to acknowledge and appreciate the AusAID support for the BEAM-ARMM initiative.

Oblate missionary Eliseo Mercado, Jr., director of the Institute for Autonomy and Governance, a partner outfit of the Konrad Adenaeur Stiftung of Germany, said the AusAid-Philippine education project will boost the Mindanao peace process, which aims to build a community of well-educated people in areas where Moro people thrive.

Mercado, who has authored several reference materials on the Mindanao Moro situation and the Southern Mindanao conflict, said education is just as essential as providing livelihood and implementing a disarmament program for people in the ARMM.

Mercado said an educated community will also appreciate the importance of relying on the country’s justice system in seeking redress and, in effect, curtail effectively the region’s peace and order problems.