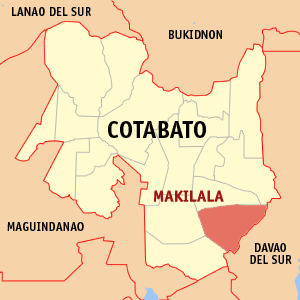 COTABATO CITY, Philippines – The military is bracing for New People’s Army (NPA) attacks as soldiers have blocked most entry and exit routes to farming communities in North Cotabato where rebels collect “protection money” and forage for food.

This, as five soldiers and two civilians were wounded in yet another roadside bombing in Barangay Kisante, Makilala town Friday night, three days after soldiers and NPA guerrillas thrice clashed in a nearby district in the municipality.

Three insurgents and a soldier were killed while seven others were reportedly wounded in the encounters, according to local officials.

Two civilians waiting for a passenger vehicle not far from the scene of the explosion were also injured.

“Apparently the bombing was in retaliation for the heavy losses suffered by the NPA rebels in the area during recent encounters with government forces there,” said Col. Ademar Tomaro, commander of the Army’s 602nd Infantry Brigade.

Local officials said more than a dozen NPA rebels have been killed in encounters with soldiers in Makilala and Magpet towns in recent weeks while attempting to go to farming communities to collect “revolutionary taxes” and get food supplies.

“They could not get close to the villages whose residents they force to shell out money and rice and other provisions because our soldiers have efficiently been guarding all the routes connecting them to these areas,” Tomaro said.