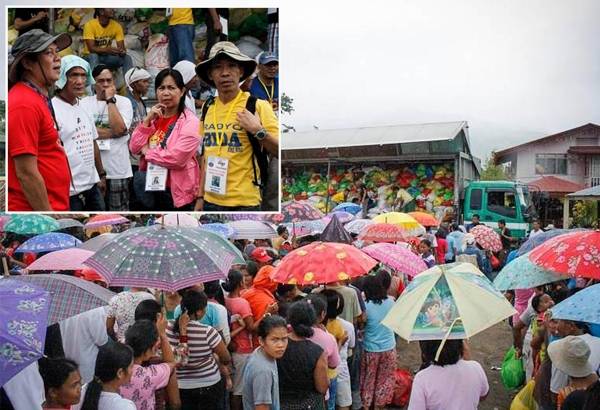 COTABATO CITY, Philippines - More than 2,000 victims of typhoon Pablo in Monkayo town in Compostela Valley benefited from another relief mission of a Catholic group here, its third since December.

The outreach project, led by the Oblate Missionary Foundation of the Oblates of Mary Immaculate (OMI), delivered to Monkayo last week some 10 tons of relief supplies comprised of used clothes and food rations donated by Muslim and Christian communities in the cities of Koronadal, Kidapawan and Cotabato.

The OMI’s Notre Dame Broadcasting Corp., which has five radio stations in Central Mindanao that are engaged in various peace advocacy programs propagating Muslim-Christian solidarity since 1960s, spearheaded the collection of relief supplies through an extensive broadcast campaign.

The local Oblate community, backed by its Philippine provincial superior, Fr. Larry de Guia, earlier facilitated the transport and distribution of relief supplies to other towns in Compostela Valley and Davao Oriental.

The OMI has been operating dozens of missionary projects in Central Mindanao and in the island provinces of Sulu and Tawi-Tawi, both component areas of the Autonomous Region in Muslim Mindanao. The religious group, whose pontifical base is in Rome, also has projects complementing the Mindanao peace process.
A Catholic missionary in Monkayo, Fr. Raymund Suela, said they are grateful to the people that organized last week’s OMI-led relief mission for thousands left homeless by typhoon Pablo that struck many towns in the adjoining Compostela Valley and Davao Oriental provinces.

Monkayo, a first class town in Compostela Valley, was the hardest hit by typhoon Pablo, which ripped through Northern and Eastern Mindanao on Dec. 4, leaving close to a million people homeless.

“Practically typhoon Pablo erased the entire municipality from the face of the earth,” said Suela, who is parish priest of the St. Ignatius of Loyola parish in the town proper of Monkayo.

A mother of five, Rose Buhat, of Barangay Pasian in Monkayo, said the relief mission of the Oblate community was the fourth to have reached their municipality since December, preceded by three relief operations by government organizations.

“Our coming over is our simple way of helping these needy calamity victims,” Domingo, also chief executive officer of the OMI’s weekly newspaper, Mindanao Cross, was quoted as saying by members of their relief team.

The OMI also initiated a live puppet variety show and parlor games to entertain children from typhoon-hit communities in Monkayo, as a psycho-social intervention meant to alleviate them from trauma and tension.