P-Noy vows to achieve peace in Mindanao before term ends 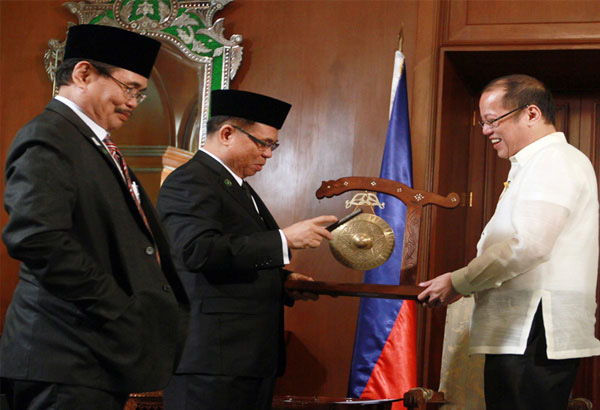 COTABATO CITY, Philippines – President Benigno Aquino III reassured the Moro Islamic Liberation Front Monday of his commitment to finish the peace talks with the rebel group before the end of his term in 2016.

The government-MILF talks, which started January 7, 1997 at the Da’awah Center in Simuay area in Sultan Kudarat town in Maguindanao, were first initiated by then President Fidel Ramos, after he and Nur Misuari of the Moro National Liberation Front signed on September 2, 1996 the GPH-MNLF final peace accord.

The president, who addressed members of the MILF’s central committee and hundreds of spectators, recalled how his administration crafted with the rebel group last October 15, 2012 the Framework Agreement on Bangsamoro (FAB).

The acting governor of the ARMM, Mujiv Hataman, and the chief executive of Maguindanao, re-electionist Gov. Esmael Mangudadatu, were among the government officials who attended the launching of the Sajahatra Bangsamoro.

The mayor of Sultan Kudarat, Tucao Mastura, and his constituent-local leaders also attended the event.

Murad even cited a verse in the Qur’an obliging Muslims to reciprocate any attempt by an adversary to build peace to achieve unity and harmonious co-existence.

The President also led the distribution of Philippine Health Insurance Corp. membership cards to hundreds of rebels, including Murad.

The launching of the Sajahatra Bangsamoro was also highlighted by a fluvial caravan of Moro watercraft, draped with colorful flags, from Butilen River in Taviran District in Datu Odin Sinsuat town down to the Tamontaka River which straddles through the border of Maguindanao and Cotabato City.

The fluvial parade was organized by the Army’s 6th Infantry Division and the office of the governor of Maguindanao, in support of the FAB.

A “football for peace” competition, involving Moro and military athletes, was also held at the oval of the 6th Infantry Division inside Camp Siongco in Datu Odin Sinsuat. -- John Unson/The Philippine Star