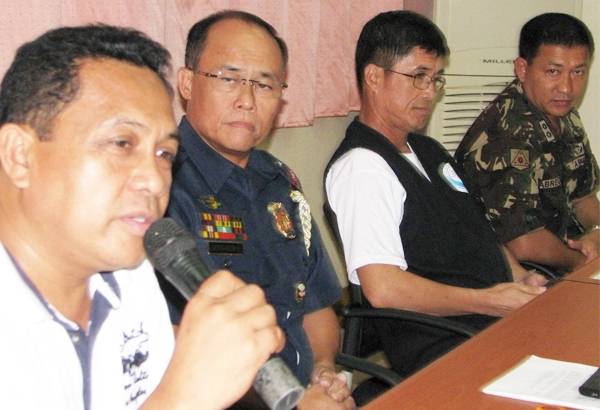 COTABATO CITY, Philippines - The police on Friday started monitoring extensively the security situation in three of the five provinces of the Autonomous Region in Muslim Mindanao, where hostilities could possibly erupt during next year’s midterm elections.

The three ARMM-component areas - Maguindanao, Lanao del Sur and Basilan, are among 15 provinces listed by the central office of the Department of Interior and Local Government as “priority provinces” based on reported existence of private armed groups, having so many loose firearms in the hands of residents and having most cases of election-related violence during the 2007 and 2010 elections.

The ARMM also covers the island provinces of Sulu and Tawi-Tawi, and the cities of Lamitan and Marawi. Lamitan is the seat of the provincial government of Basilan, while Marawi is located inside Lanao del Sur.

Chief Supt. Mario Avenido, director of the ARMM police, said the provincial police offices in Maguindanao, Lanao del Sur and Basilan are now formulating security plans on how to effectively help the Commission on Elections administer safe and fair elections, or “SAFE,” in the three provinces next year.

“Helping administer SAFE (safe and fair elections) is an initiative that should involve all sectors. We can’t leave everything to the Comelec, the Philippine National Police and the Armed Forces of the Philippines,” Avenido said.

The ARMM is known for having clan wars involving big families that stockpile firearms, including assault rifles and shoulder-fire grenade launchers, both as status symbol and for protection from adversarial groups.

Avenido, however, said he is confident that next year’s local elections in the ARMM will be peaceful owing to the willingness of politicians to sign peace covenants that will bind them to abide by the Omnibus Election Code.

Avenido said they have targeted the amicable settlement of more “rido” before the conduct of the May 2013 local elections.

The autonomous region was already close to holding its supposed eight regional elections last August 8, 2011, but the exercise was effectively reset and synchronized with next year’s local and senatorial elections by Republic Act 10153.

RA 10153 also authorized President Benigno Aquino III to appoint caretakers for the regional government, pending the election in 2013 of a new, duly-elected set of ARMM officials.

The PPCRV’s regional chairman for ARMM, Fr. Dave Procalla of the Diocesan Clergy of Cotabato, has assured Avenido of their group’s support in brokering peace covenants meant to ensure harmony among rival political clans in Maguindanao and other ARMM provinces.

The PPCRV has documented dozens cases of election-related violence, including politically motivated murder and homicide incidents, during past regional and synchronized local and national political exercises in the region.

Maguindanao’s provincial election director, lawyer Udtog Tago, said he is optimistic that the Comelec’s having removed from the new book of voters for Maguindanao a total of 127,121 underage and multiple registrants will ease the political tension in the province.

Tago said 543,034 registered in the July 9-18, 2012 general re-registration of voters in Maguindanao, but 127,121 non-qualified registrants have been delisted during deliberations by the Election Registration Board from Nov. 26 to 30, 2012.

Only 440,332 voters remained in Maguindanao’s new voters’ list as a result of the ERB’s delisting process.

Tago, who is an ethnic Maranaw Muslim, said it is important to involve Islamic religious groups in helping the police, the AFP and the PNP jointly administer SAFE in Maguindanao and other areas in the autonomous region in 2013.

“Electoral exercises are `sacred activities’ in Islam. It is something that should be protected at all cost. Islam has strong teachings on participatory democracy and respect for results of elections, as a community undertaking, or any consensus reached during cross-section dialogues,” Tago said.

The commanding officer of the Army’s 6th Infantry Division, Major Gen. Caesar Ronnie Ordoyo, said they will not take sides during the May 2013 elections.

Ordoyo said he will personally push for the prosecution and dishonorable discharge from the military service of any subordinate implicated in electoral fraud.

“We are not politicians. We are guardians of the people and the Constitution. Guarding the communities we ought to serve can also come in the form of helping the Comelec administer peaceful and clean elections in areas inside the 6th ID’s jurisdiction,” Ordoyo said.

Oblate missionary Eliseo Mercado, Jr., director of the Institute for Autonomy and Governance (IAG) in Cotabato City, said the PNP and the AFP should both enlist the support of the joint ceasefire committee of the Moro Islamic Liberation Front and the national government in performing election-related peacekeeping missions next year.